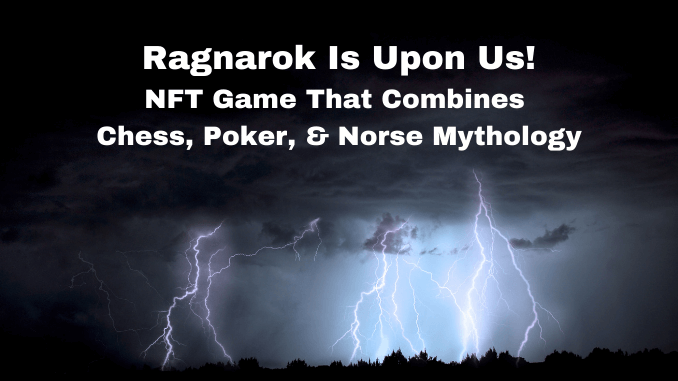 In 2022 a team of game developers will release a new card trading NFT play-to-earn game called Ragnarok. The game will be released on the Hive.io blockchain, with the first NFT airdrop for Hive hodlers happening as early as 6th January.

It’s going to be a high-challenge high-payout game…

Ragnarok combines elements of chess and poker with norse mythology (and later on, other mythologies too) to create a strategy game in which gods, titans and other legendary beings go to war on a modified chess board.

Play begins as a chess game with each square colour-coded to represent one of the four elements.

Pawns are demi-gods or legendary humans.

Rooks, Knights and Bishops are gods or titans.

Queens are legendary gods or titans.

Kings are legendary gods or titans that were leaders or highly influential beings.

Who exactly each piece is, and what powers they wield, depends on the cards you allocate to them within the parameters of the game.

In a normal game of chess, the attacking piece always “takes” the defending piece and occupies its square. However, in Ragnarok which piece wins will be decided by card-based combat. Combat is divided into two phases, the “spell phase” and the “hero attack phase.”

It is during the attack phase that the “no limit hold ’em” poker element of the game comes into play and is all about how much faith and favour you have as you go into battle.

The cycle is repeated until one of the gods is knocked out. Then the chess game resumes until two pieces meet on the same square and a new battle commences.

The game continues until one of the Kings has been defeated. The player whose King is defeated loses the game.

At the end of each game the winner receives EXP tokens, which will be a second-tier Hive token that can be traded on platforms such as Hive-Engine.com and used to upgrade your gods. Speaking of trading, this game is going to be a major earner for those players who get skillful at it…