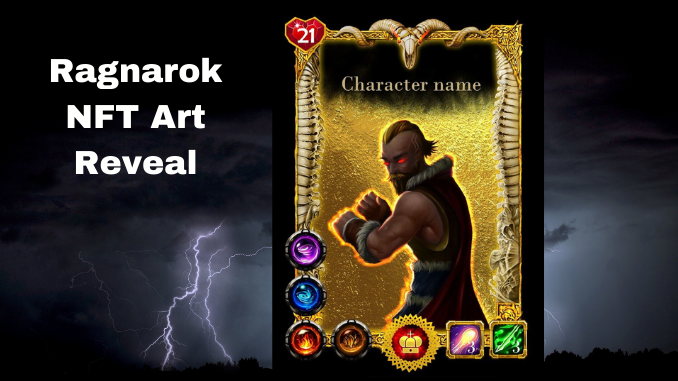 A few days ago the @ragnarok.game guys gave us a sneak-peek of the kind of designs they have been creating for the Ragnarok NFT game.

What they revealed was not an actual card but more of a prototype that featured genuine design elements.

The prototype they revealed was an example of a “hero” card. The border of the card shows that the hero belongs to the Vanir. The Vanir are one of the two tribes of gods that were said to occupy two of the branches of the world-tree, Yggdrasil, in Norse mythology.

Explanation of the Card Elements

Border: This shows the group to which the character belongs. (The bone-frame shows this character is a Vanir.)

Background: There are gold, silver and bronze backgrounds. They affect how many EXP tokens you earn each time you win.

Eye Colour: The colour of the eyes shows you which element the character is associated with.

Bottom Left Circles: Abilities. One circle per ability, with a maximum of four abilities.

Bottom Centre: Chess archetype. (This prototype Vanir would be a King, and a pretty powerful one too!)

Bottom Right Squares: Abilities specific to the class of character. A character can have up to 3 abilities.

We expect the next Ragnarok NFT card art to be revealed to be for the Aesir tribe of Norse gods!