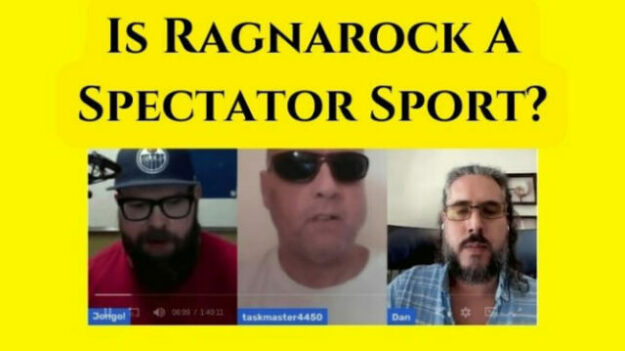 In this Crypto Maniacs podcast hosts Jon Olson and Taskmaster4450 interviewed TheyCallMeDan, the innovator behind the Ragnarok project.

Jongo asked Dan about the “spectator sport” aspect of Ragnarok, which I thought was a refreshing question that led to some new insights into our understanding of the game.

Ragnarok is definitely going to be a spectator sport in the idea that there’s a capped number of NFTs. There can only be so many players and the decks are hard to accumulate because you need a certain card for each place (on the modified chess board), so you might not get your ideal deck, just a deck that you can play even if it’s not your favourite.

And then, over time, you might collect cards and when you get a card you really want, so yeah there’s going to be new cards to come out, but they’re capped. The new cards that come out are unclaimed ones that we cycle back into the game.

Ragnarok is not supposed to be “fair”

So every year for so often the winners and the top hundred are going to be able to get new cards. There’ll be quests for new cards, but for the most part when all the cards are out you’re going to know who’s got what, and there’s going to be people who are like, “Man, I need to get my hands on one of these decks,” because there’s only so many of them and you might not be able to get to that deck and that might not be fair, and the games that really meant to be fair in that aspect; it’s about what decks you can get and you know how good you are spread out across the three games.

Highly skilled players with vulnerabilities will be compelling to watch

If you get a skill game and you have the skill very high, people are going to want to watch that. Like, this guy is a chess expert but his weakness is poker, or this guy is really good at P2P card games like Heartstone, but his chess game’s weak. He might not have good skills here, he might go on tilt. It’s a longer game, so there are swings. There’s an element of a poker tournament where you might start off strong, you might mess up and you might go on tilt if you’re overly aggressive and punt the game.

I try to take in the aspect of what is the most demanding and intense skill-based game and I say you can go really intense about 30 the game should not last an hour but about 30 minutes of just hardcore intensity really using up all your brain the ideas not get bots I’m trying to make it un-bot-able I don’t know if that’s possible, but man, imagine a bot to bot Ragnarok. That would be impressive. It’s at least going to take a long time to create, but it would have to be good at chess, poker, heartstone, there are so many things it would have to be good at, so many nuances, and so much human element is needed that, I’m not going to call it unbotable, but that’s the idea.

And big yearly prizes so when you’re when you’re getting close to the year and people are jostling for spots, that’s fun to watch, people really like that, it gets intense, especially you know maybe year 10, if you’ve had a few popular years that made the treasury enormous, so now you have outsize, really big top hundred prizes, and it becomes a spectacle. people are going “Oh wow this is a lot of money to win,” and it’s pure, and there’s no cheating, it’s interesting.

Yeah, so definitely a spectator sport.

Deck Building Is Half The Battle

Everyone’s going to be a part of it because we’re building in such a way where it’s going to be encouraged to have layer twos built on and those layer twos could be peer-to-peer betting, or whatever. I’m not going to have control of that. So the game is going to be built with little plug-ins, like a racetrack for horses, and it’s going to have seats, a ticket booth and all of that, but it’s going to be run in a decentralized way where people can be a part of it because I think that if you take the staking approach from poker where you can back players with money and take a percentage of the winnings or you can just bet on the outcome so we can bet on individual matches, or players as they are playing they can bet on each other that’s fun and it’s awesome … so I think that’s sort of the environment that you can sort of expect.

Well, that sounds exciting and it seems to me that if you want to get a good deck of cards you’d better power get in early and get your decks in order.

Okay, that’s enough for one post although there’s well over an hour left on the podcast. Enjoy!